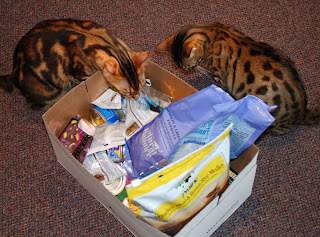 Tanj and Uschi are shopping for new foods.
Earlier this week, we found out that some pet foods with concentrated rice protein were contaminated with melamine (similar to the foods with melamine-contaminated wheat gluten last month). Five manufacturers produce pet food brands potentially containing this contaminated rice protein. Natural Balance and Blue Buffalo Company quickly announced recalls of some of their foods. Now Royal Canin has joined the recall with some of its dry dog foods and one of its dry cat foods. That means there may be two more manufacturers announcing recalls shortly, the FDA has not released their names yet.

According to today's news, apparently some pet foods distributed in South Africa contained corn gluten contaminated with melamine, but the contaminated corn gluten has not been found in the United States. Tanj and Usch have not been eating the recalled Royal Canin dry food (feline hypoallergenic HP23), but we wanted to let you know the latest. Give your kitties and doggies a hug for us!!

Email ThisBlogThis!Share to TwitterShare to FacebookShare to Pinterest
Keywords: food

Yep! Be weawwy careful about those foods!