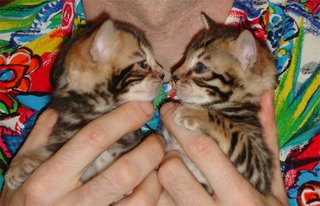 Eight week old boys "do I have to go home with him?"

Adoption Letter
Announcing our adoption of Tanjiro and Uschi-Swirl ~March 31, 2006
(Some of the pictures are from our "8 week old visit" and some
from when we picked them up when they were 12 weeks old)

The last of our final “herd” of rats died in early January 2006 and we decided that we were ready for a longer term commitment. We decided to investigate adopting a cat or two. We looked at all the various breeds; comparing their personalities/temperaments, physical attributes/requirements, etc. We even had spreadsheet lists and took several online tests that attempted to match cat breeds with what you wanted.

After several weeks of searching we decided that Bengal Cats fit our desires most closely: outgoing, highly intelligent, very athletic, vocal, and social. cats are a cross between domestic cat breeds and Asian leopard cats, intended to produce a “wild-looking” and friendly cat. We then spent a few weeks searching the country for available Bengal Kittens. Lesley found a breeder we liked (Kelli of Cheetahsden Bengals NW) in .

We liked the look of Cheetahsden NW’s cats, website (design and current-ness), prompt and detailed email replies, the time spent with the kittens socializing them to humans, cats, dogs, the house, etc, the training (litter box, harness/leash, etc.), and the requirement that the kittens remain with her for at least 12 weeks for the health and development of the kitten. Kelli recommended that we compile a list of attributes we wanted from our cat (M/F, coat pattern, personality type, what we wanted to do with the cat, our available time to spend with the cats, etc.)

We decided we wanted two males (they get larger and can be more human oriented), brothers if possible (at least we wanted them to grow up together), one marbled (like a cloud leopard) and one spotted (like a regular leopard), and outgoing so we could take them on walks and travel with them in the car, definitely not skittish.

The timing was right on; approx. two weeks after we decided we would like to go with kittens from Cheetahsden NW, four litters were scheduled to be born.

On February 18, we were offered a marbled female kitten from the first litter, with the caveat to “remember our wish list.” We decided we needed to visit in person in order to decide, and went up to to see the kitten. While there we got to meet the three other new litters of kittens just born. We stuck to our “wish list” and looked closer at a big litter of six boys that were two weeks old.

“Jet” was the only marbled boy. His pattern was stronger than the female we had been offered, and we adopted him on the spot with the hopes of being offered one of his brothers. We spent the next 1.5 weeks making lists of potential names going through thousands of names, terms, etc, and came up with “Uschi-Swirl” (Uschi or “cute bear” for short, I've also been watching a bunch of Biathlon, Uschi Disl is a star of womens Biathlon, her name has just stuck in my head).

A few weeks later (March 7, 2006) we were offered our choice of four of the remaining five brothers and we went right back for another visit (mid week).

The kittens were only 5 weeks old at this point and to our eyes all the spotted boys looked similar. We spent three hours lying on the floor with them trying to tease out some insights on personality and future coat pattern.

After much agonizing we agreed with Kelli that “Hawken” (renamed to Tanjiro or Tanj, meaning “high valued second son”) was the boy for us. As we left, Kelli offered her spare room to us if we wanted to visit again.

Two weeks later (March 27, 2006) we took her up on her offer and headed back to for our third visit. The kittens were now 7.5 weeks old, and we felt it was getting to the end of their “imprinting” stage and wanted to be sure we spent some time with them. Additionally, we needed a stronger feeling of their personalities. We arrived at 2pm and spent 10 hours playing with the 12 kittens growing up together. Our boys got their first 5 minutes of harness training, they did pretty well >;-)

That night Uschi and Tanji spent their first night away from their brothers and mom (Skye). They “slept” with us. Well they mostly slept huddled in their “cat cup”, but they did not appear scared and didn’t cry at all. About 6am we got up and played with them, they mostly wrestled with each other and explored the room. An hour or so later Tanji let out a few soft cries that seemed to be more of a cry for food then fear. Uschi had already begun eating hard and raw food. We figured Tanji needed to get back with mom. We brought them back downstairs and they got all excited and ran around with their brothers. After a little while Tanji realized he was hungry and found mom.

Kelli brought in some raw chicken (used to help wean the kittens) and most of the kittens went at it. Tanji still didn’t recognize it as food and wanted mom. Lesley worked with him a bit by holding a small piece in front of his nose and on his lips; he tentatively took a small piece then went at it and ate a bunch from the bowl.

Kelli opened the other kennels and the other kittens came running out to play. They all went at it for an hour or so and then began to crash. We decided it was time to hit the road and left with 550+ pictures, after discarding the out-of-focus ones.

We left confident in our choice and happy with their development and knowing that 4 weeks was going to be a long time to wait.

I have been “cat proofing” the house by finishing up things that need to be finished and building some more places for the boys to enjoy. We have purchased all the toys and goodies they will need, including a cat wheel!! Bengals love these cat wheels because they are great athletes and love to run. I have built a perching/climbing place for them in our big window, put up closet doors to keep them from climbing the hanging cloths, built a counter with shelves to hold bins for our loose cloths and stuff. Items still to complete; closing in under the kitchen sink (trash/recycling will go there) and I plan on closing in under our eaves around the S-W side of the house so they have an outside cat run, that is secure (we don’t want them to be running outside unsupervised).

Well that is our adoption story so far. I hope you enjoy the pictures. 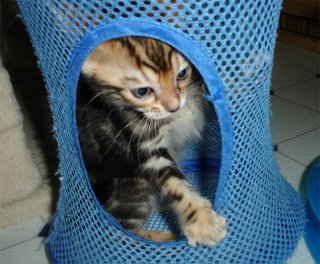 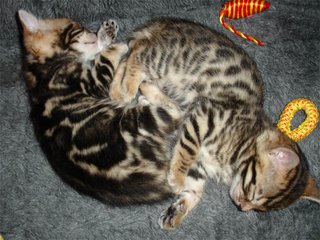 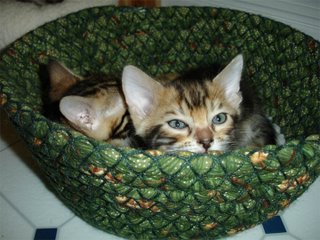 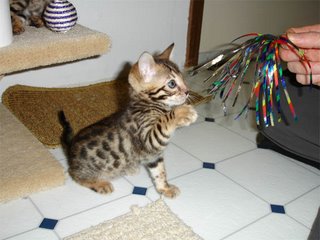 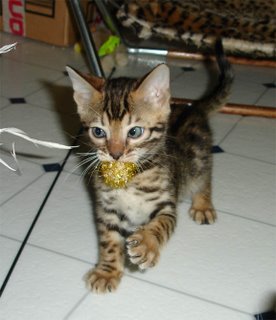 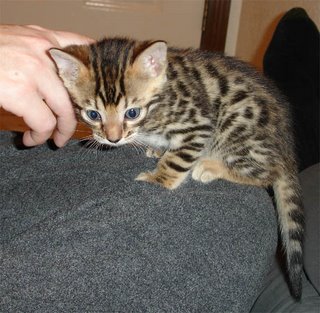 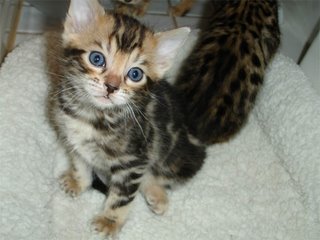 Yeah! Marshall would like to give both of them kisses.